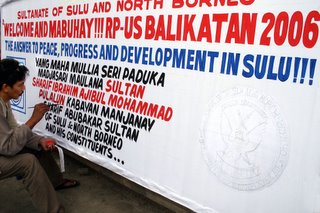 "Let us show the world that we are peaceful citizens. I appeal to every Muslims to welcome our American visitors and support their peaceful cause," Sultan Pulalun told the Zamboanga Journal.

The training, dubbed as Balikatan (shoulder-to-shoulder) 2006, is expected to bring humanitarian and medical aid to many poor families in Jolo, one of the poorest provinces under the Muslim autonomous region.

But Jolo is also a known stronghold of the al-Qaeda-linked Abu Sayyaf group, blamed for the spate of kidnappings and terrorism in the troubled southern region, and any attack on US soldiers could jeopardize government efforts to bring aid and development to the island.
This year's joint training exercise is the 22nd in a series that began in 1981, and would involve infantry and marine troops from both countries.

Security would be tight during the exercises to protect the US and Filippino soldiers against possible attacks by Abu Sayyaf militants. The Abu Sayyaf previously threatened to attack US targets in the Philippines, and had killed three Americans, including a soldier, in Zamboanga City in 2002.

Officials said the exercise is consistent with the Mutual Defense Treaty and Visiting Forces Agreement and will improve combined planning of the US and Philippine military forces. It is one of many ongoing activities under the framework of RP-US military security cooperation.
The Balikatan 2006 demonstrates Washington's resolve to continue the commitment to train, advise and assist the Philippine military to build capacity to counter terrorism.

The training program, officials said, includes support for comprehensive defense reform; security assistance modules for counter-terrorism training; operations intelligence fusion; and aspects in education programs, logistics, engineering, equipment, maintenance and helicopter programs.
It will also enhance the skills and capabilities of Filipino and Amercian forces in combating terrorism and other internal and external security threats. And improve inter-operability between RP and US forces through the exchange of training skills and techniques.

About 250 US soldiers and over a thousand Filipino troops are expected to participate in the training set to start next week. The training is part of Washington security assistance to the Philippines, a key US ally in Southeast Asia in the so-called global war on terrorism.
Officials said the training would only be for about two weeks, but US and Filipino soldiers may stay longer for the conduct of medical mission and other humanitarian activities in poor areas in Jolo.

A small group of US troops are already in Jolo and active in humanitarian mission, the island's military chief Brig. Gen. Alexander Aleo said.
"Filipino and US troops are active in medical mission, and we are to start joint training and humanitarian activities in the coming weeks," he said in a separate interview.
Gen. Aleo praised the Sultan for his strong support to the Balikatan. "We really appreciate the support of Sultan Pulalun and the Muslim people because we are also for peace," he said.

"We ask for nothing in return, but I humbly appeal to the government to help our poor people and give them access to basic services, such as health and education," Sultan Pulalun, who is active in humanitarian works in the south, said.

Many poor Muslims in Jolo only benefit from free medical services when non-governmental organizations conduct humanitarian missions or after months of fierce battle between military and rebel forces.