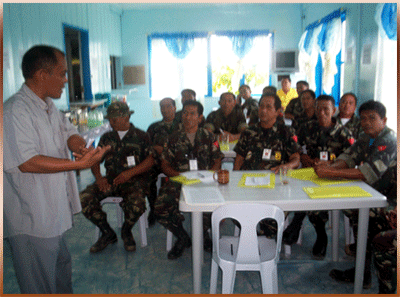 One of the seven batches of SCAA personnel undergoing Human Rights training, a joint undertaking of TVIRD, AFP Southern Command and the Commission on Human Rights.

ZAMBOANGA DEL NORTE (Roche Hilario / 28 Apr) Human rights take a front seat in the ongoing training of Special Citizens Armed Forces Geographical Unit Active Auxiliary (SCAA) personnel assigned by the Armed Forces of the Philippines (AFP) to secure the Canatuan Project of TVI Resource Development Phils., Inc. (TVIRD) in Siocon town in Zamboanga del Norte province in western Mindanao.
In a joint activity with the Commission on Human Rights (CHR) –- a “first” for both the Commission and the industry –- TVI has embarked on a special training program to ensure heightened sensitization of Human Rights issues and management on the part of security personnel.
“The emphasis on human rights in this training series is intended to reinforce the basic human rights training the SCAA personnel initially had with the AFP and progress towards instilling a deeper commitment to serve and to protect,” Ed Coronel, TVIRD Social Commitment Director, said. “We think this is part of Responsible Mining, and Best Practices.”
The training program also seeks to prepare the company when it implements the Voluntary Principles concepts being advanced jointly by the governments of the USA, UK, Norway, and the Netherlands; by a number of major global corporations; and by a number of international NGOs such as Amnesty International.
The objective is to take every measure possible to ensure that human rights are protected at the same time that TVIRD’s people and property are protected. Discussions are under way with the Principles’ Secretariat (jointly managed by the Prince of Wales’ International Business Leaders Forum and the US-based Business for Social Responsibility) to identify circumstances under which TVIRD and its international company, TVI Pacific, Inc., can participate in the Principles, even before Canada has become a signatory.
Divided into seven batches, all 167 SCAA personnel in Canatuan and TVIRD’s seven security managers are participants in the three-phase training program. Phase 1, conducted by Jose Maria Perez of the Action for Social Progress Inc. last month.
It focused on topics such as reinforcement of discipline values, the security function’s role in environmental protection and community relations, the rights of indigenous peoples as articulated in the Indigenous Peoples Rights Act, the rights and responsibilities of a SCAA recruit as a Subanon.
Raul Quibuyen, CHR's Legal Officer and Armando Borromeo, Education & Research Chief, are among the resource speakers in the weeklong seminar that started April 22.
Included in the seminar are topics on the Bill of Rights, criminal procedures, International Humanitarian Law, and the Philippine Human Rights Enforcement System.
SCAA units assigned to Canatuan are under the direct control and supervision of the 1st Infantry Battalion of the Philippine Army and in accordance with AFP rules and regulations.
Posted by The Mindanao Examiner Regional Newspaper at 9:27 AM