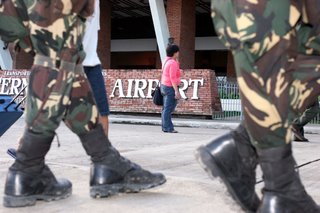 A woman speaks on her cell phone outside the Zamboanga International Airport in the southern Philippines. The Moro Islamic Liberation Front is alarmed over the spate of summary killings and human rights violations in the region blamed by the Amnesty International to the military. (Zamboanga Journal)

He said over 600 people were victims of political killings that last five years. The National Union of Journalists in the Philippines said more than 70 journalists were also murdered since 2001, making the country the most dangerous place for journalists, second to Iraq.

But the military's Southern Command disputed Musa's statement, saying, there is now an atmosphere of peace in the region.

"There are no rampant human right violations or summary killings in Mindanao or in Sulu archipelago. There is now an atmosphere of tranquility in the region because of efforts not only of the government, but also by different nongovernmental organizations, the church and the people themselves, to work together for peace and harmony," Major General Gabriel Habacon, commander of military forces in the southern Philippines, told the Zamboanga Journal.

The military had previously blamed the communist New People's Army and the al-Qaeda-linked Abu Sayyaf group for the series of killings and bombings in the region.

Arroyo's spokesman Ignacio Bunye said the AI report was unfair, after the human rights watchdog claimed a climate of impunity exists in the Philippines.

Musa said the AI report was objective and fair and reflective of the total human rights condition in the country. "The Arroyo administration must do something concrete to stop these senseless killings immediately or it has no reason to stay in power any longer," he said.

In its annual human rights report, the AI said the lack of confidence in government and the criminal justice system contributed to the apparent public tolerance on killings and violation of rights in the Philippines. It also scored the rise in human rights abuses and summary executions of political activists in the country.
It said many leftist activists in Luzon were killed by unidentified assailants and most of the killings were often blamed on the military.
Posted by The Mindanao Examiner Regional Newspaper at 11:19 AM

Until a full investigations is finish, it is Hard to tell. There are many stolen armunitions from the military. Many camps were ambushed. And, many armunitions was stolen. It can be use against them. Like a frame up. Just wait and see.

Thank you for visiting zamboangajournal.com again.

Plus, CPP and NPA have oppress many for so many years. In due time, the oppressed people will come back to hunt them. Another, Leftist might have use NPA's funds. As you can see, NPA have interest to protect. Look at the name of the political party. It has "demokrasya", "bayan muna", or so. It does not reflect NPA and CPP. NPA are afraid to be double cross. NPA must be watching closely batasan 5 or leftist who will flip flop. Finally, you can see the assasin style. It is uncharacteristics of a military and amateuristic style of assasin.