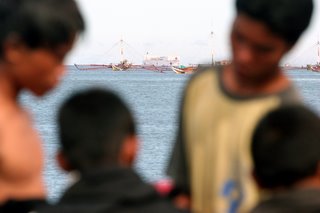 A group of young fishermen talk from a beach Friday 26 May 2006 as they await for the U.S. Navy hospital ship Mercy anchored behind a fleet of trawlers off Zamboanga City. The USNS Mercy is on a month long medical mission in the strife-torn southern Philippine region where the al-Qaeda-linked Abu Sayyaf group is operating. (Zamboanga Journal) 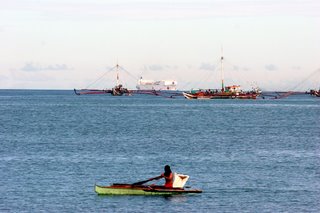 A masked fishermen sails Friday 26 May 2006 off Zamboanga City where the U.S. Navy hospital ship Mercy is anchored behind a fleet of trawlers. (Zamboanga Journal) 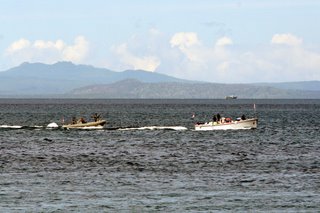 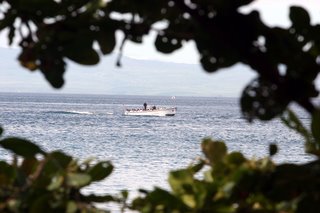 US soldiers escort Filipino patients Friday 26 May 2006 for medical treatment to the USNS Mercy anchored off Zamboanga City in the troubled southern Philippine region. Security is tight around the ship and Filipino and American navy seals were guarding the Mercy to prevent possible terror attacks from the al-Qaeda-linked Abu Sayyaf group, blamed for the spate of bombings and killings in the region. (Zamboanga Journal) 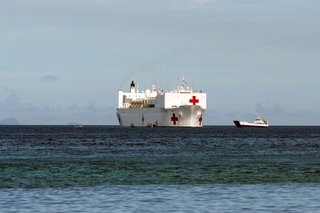 The U.S. Navy hospital ship Mercy is anchored off Zamboanga City on Friday, 26 May 2006. The USNS Mercy is on a month long medical mission in the strife-torn southern Philippine region where the al-Qaeda-linked Abu Sayyaf group is operating. (Zamboanga Journal)
ZAMBOANGA CITY (Zamboanga Journal / 26 May) Security was tight Friday in Zamboanga City after the U.S. Navy hospital ship Mercy arrived for a series of medical mission in the strife-torn southern Filipino region, where members of the al-Qaeda-linked Abu Sayyaf group and communist insurgents operate.
The USNS Mercy, which departed Manila for Zamboanga Tuesday, is also heading for the troubled islands of Jolo and Tawi-Tawi in the Sulu archipelago for a similar humanitarian mission.
Both the Abu Sayyaf and the Maoist New People Army rebels have previously threatened American targets in the Philippines and had in the past attacked U.S. soldiers participating in anti-terror exercises in the country.
Heavily-armed Filipino and American troops were spotted guarding the 272.5-meter-long ship anchored off Zamboanga City. Government officials and security leaders were ferried by helicopters to tour the ship.
"We are very thankful for doctors from America for the assistance that they will provide to the Zamboangueno patients", Zamboanga City Vice Mayor Maria Isabelle Climaco told the Zamboanga Journal. She said more than 1,000 patients will benefit from the free medical service.
Local journalists were also invited to tour the ship, but many were disgruntled when they were told to sign a waiver and climb up a rope ladder on the side of the ship.
"Please proceed to PIO SOUTHCOM not later than 0600H to meet with PIO SOUTHCOM & JSOTF-P PAO for signing of waiver needed for the coverage on the hospital ship."

"The group will board the ship utilizing a rope ladder. Please secure your belongings (Camera, Video, Recorder etc) to avoid incident. We suggest using a back pack or any kind of bag that will help you secure your valuables," the Southern Command said in an e-mail sent to reporters late Thursday.

But journalists who covered the arrival of the USNS Mercy in Manila last week did not climb up the rope ladder and instead past through a door on the side of the ship.

"Why do journalists have to sign a waiver and climb up a rope ladder to get to the USNS Mercy? While Manila reporters passed through a door on the side of the ship when they were invited to cover and tour the ship?

"Will the Southern Command and U.S. military also tell government and military officials to climb up the same rope ladder to get to the Mercy?," one reporter asked.

Commander Pamela Kunze, of the USNS Mercy, said journalists who are unwilling or unable to use the Jacob's ladder should refrain from taking the tour.

"I understand that Jacob's ladder is not the most convenient way to board the ship, however we wanted to give media the first possible opportunity to see USNS Mercy once she arrives Zamboanga. Rest assured, we'll do everything we can to ensure safety in this evolution.

"Because we will start transporting crew, care providers and patients almost immediately upon arrival, this was the best solution available that would allow access without negatively impacting our ability to perform the humanitarian mission we're here to accomplish," Kunze said, adding, "We certainly do not want anyone to feel as if they're being treated unfairly, but under the circumstances, this is the best option we can offer for those wanting the opportunity to cover the story immediately."

At least 25 percent of the ship's crew members are Filipino-Americans and Captain Henry Villareal, second to mission commander Captain Bradley Martin, is the highest-ranking Filipino-American aboard the ship.
Selected patients in Zamboanga City were screened for free medical operation onboard the ship, which was last in the Philippines in 1986 during a humanitarian mission also.
For its current visit, the Mercy is configured with state-of-the-art medical equipment and a robust multi specialized medical team of uniformed health care providers capable of providing a wide range of services ashore as well as on board the ship, according to the U.S. Department of State.
It said the deployment of the Mercy was unique because local civilian medical professionals and nongovernmental organizations will be working side-by-side with military personnel.
Volunteers from the U.S. Public Health Service, Aloha Medical Mission, Project Hope and the Pre-Dental Society of the University of California at San Diego are joining the Mercy, along with a contingent of medical specialists from the U.S. and Canadian militaries.
Medical personnel from the Armed Forces of the Philippines will board the ship for the month long Filipino portion of the ship's five-month mission.It is also scheduled to visit Indonesia, East Timor and Bangladesh.
The crew also will work with onshore assistance organizations, such as the Taiwanese Tzu Chi Foundation, ACDI/VOCA, Save the Children and the Philippine Red Cross.
The USNS Mercy, whose home port is San Diego, can support various services such as casualty reception, optometry screenings, corrective eyewear distribution, physical therapy, burn care, radiological and laboratory services.
It also offers dermatology, urology, obstetrics and gynecology, general surgery, ophthalmologic surgery, plastic surgery, basic medical evaluation and treatment, preventative medicine treatment, dental screenings and treatment, immunizations, public health training and veterinary services.
While in Zamboanga, the USNS Mercy will also deploy a small team of sailors from the Naval Construction Force (Seabees) to perform repair and minor construction projects ashore. Some of these construction projects directly can improve local medical and sanitary facilities. The U.S. Navy Show Band deployed aboard the ship will also perform for free in select locations in the southern Philippines.
"The deployment of USNS Mercy to Southeast Asia and the Western Pacific exemplifies the United States commitment to working together with our friends, partners and the regional community," said Admiral Gary Roughead, commander, U.S. Pacific Fleet. "By deploying the Mercy , we are training our medical crew in order to better prepare them to respond in times of disaster relief."
"This mission reflects longstanding ties between the United States and the Philippines, as well as our continued commitment to work together to address mutual problems and concerns," he said in a statement released by the U.S. Embassy.
Last year, the USNS Mercy deployed in response to the December 2004 tsunami that struck Southeast Asia. That deployment resulted in the treatment of more than 107,000 patients, including 466 surgeries, distribution of 11,555 pairs of eyeglasses and performance of more than 6,900 dental procedures in Indonesia, East Timor and Papua New Guinea.
Posted by The Mindanao Examiner Regional Newspaper at 11:15 AM