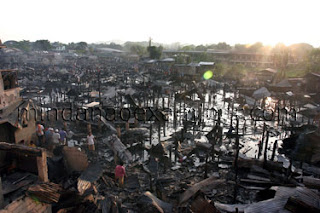 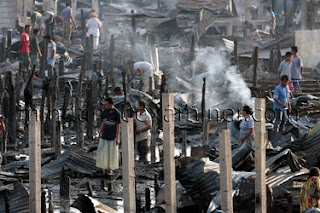 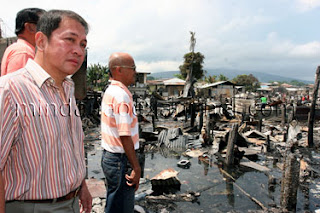 SULU, Philippines (Mindanao Examiner / 25 Sept) – At least 9 people were injured and thousands left homeless after a fire swept through a neighborhood in the southern Philippine province of Sulu.
”Nine people are with minor injuries and now at the hospital,” Gov. Sakur Tan said during a provincial peace and order council meeting on Tuesday in Jolo town.
The governor ordered a relief operation to help feed the fire victims and has offered refugees the use of the province’s sports complex as temporary shelters.
The fire broke out late Monday in the village of Asturias and more than 500 houses were burned, said village chieftain Kerkarl Tan. “There could be more victims and we need help now, like foods and blankets and tents for the refugees,” he told the Mindanao Examiner.
The governor said they would provide the refugees with tents and food aid and also sent a team of social workers and doctors to take care of the women and children. He said policemen were also sent to the village of Asturias to prevent other people from building structures or occupying lands they do not owned.
“We have to protect the victims here until such time they will be able to rebuild their homes,” he said.
There were reports of casualties, but many victims had blamed the fire department for the conflagration. They said fire engines had no water and residents doused their houses with dirty water taken from canals and creeks.
“Now, we don’t know where to stay for the night. Our house is burned and we have nothing left,” said Ibrahim Abubakre, a fisherman.
Authorities were investigating the cause of the conflagration, but one woman said the fire started from a wooden house where an oil lamp fell to the floor. “That’s where it all started,” she said.
The fire ate up at least two blocks in downtown Jolo, said a man, Nasser Unting.
“My conservative estimate is that more than 500 houses are burned and thousands are without homes and that’s for sure,” he said, pointing to the direction where houses were burning.
“You look at the sky, it’s red, and that’s fire below. You can hear people screaming and crying and cursing and you can’t blame them,” he said. (Mindanao Examiner)
Posted by The Mindanao Examiner Regional Newspaper at 4:58 PM