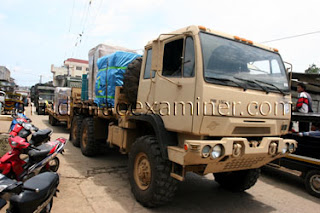 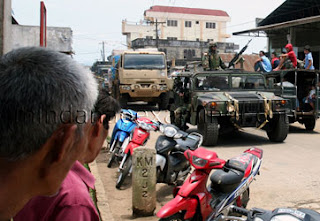 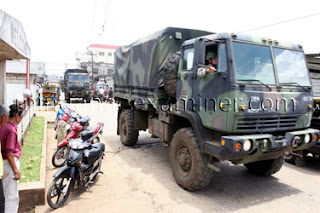 A US convoy transporting supplies and equipment for infrastructure passes Thursday 27 Sept, 2007 through a village in Indanan town in Sulu province in southern Philippines. Washington has poured $3.7 million in development projects in Sulu to help in Manila's peace efforts. Sulu Gov. Sakur Tan said the money will be used for the repair of the Jolo airport and the putting up of a potable water system in the province. Last month, the US signed a $190 million grant aid for various infrastructure projects in Mindanao island. (Mindanao Examiner Photo Service)

SULU ISLAND, Philippines (Mindanao Examiner / 27 Sept) – US and Filipino soldiers deployed in Sulu have began moving supplies and equipment for infrastructure projects on Thursday as more countries pledged to help develop the southern Philippine province.
The soldiers were spotted passing in the town of Indanan in several trucks and jeeps transporting equipment to the delight of the locals. “We have projects to do here…for the people,” one Filipino soldier yelled as their truck headed to Indanan.
Hundreds of US troops are stationed in Sulu and helping Filipino soldiers carry out humanitarian missions on the request of the Philippine government. The US is also training local troops in anti-terrorism warfare.
Sulu Gov. Sakur Tan said some countries, including Syria, have expressed to help in peace and development projects in the province.
“We welcome all assistance and aid from donor countries and international nongovernmental organizations to promote peace and development in the region,” he told the Mindanao Examiner.
Tan did not say what other countries have pledged to help Sulu, but on Monday the United States and Britain unveiled a huge package of development projects in the province in an effort to help Manila bring peace and progress in the region.
Ambassadors Kristie Kenney, of the United States, and Peter Beckingham, of the British Embassy, arrived in Jolo town and announced a $3 million funding for the repair of the local airport and the installation of a $700,000 potable water system in Sulu.
Tan said the US and British projects will help a lot of people in Sulu, one of five provinces under the Autonomous Region in Muslim Mindanao.
It was on top of the $190 million development and economic growth agreement the US signed last week to help fund other projects in Mindanao. (Mindanao Examiner)
Posted by The Mindanao Examiner Regional Newspaper at 11:03 PM