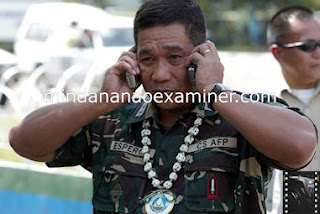 Philippine military chief General Hermogenes Esperon, who is visiting troops in Zamboanga City in Mindanao island, speaks on his mobile phones Thursday Nov. 30, 2007 after a group of soldiers led by Army Brigadier General Danilo Lim and opposition Senator Antonio Trillanes and hundreds of civilian supporters headed by former Vice President Teofisto Guingona marched in Manila and called on the military to withdraw its support from President Gloria Arroyo. Trillanes and Lim, who previously accused Arroyo of corruption and cheating in the May 2004 elections, are facing coup d'etat charges following a failed coup attempt in February 2006. (Mindanao Examiner Photo Service)


MANILA, Philippines (Mindanao Examiner / Nov. 29, 2007) – Philippine military chief General Hermogenes Esperon vowed Thursday to crush an uprising in Manila.
Opposition Senator Antonio Trillanes and Army Brigadier General Danilo Lim led a group of soldiers and civilian supporters to a long march that ended in the posh Manila Peninsula hotel in Makati where they called for Arroyo’s resignation.
Among those who joined Trillanes and Lim was former Philippine Vice President Teofisto Guingona and leaders of civil society groups opposed to Arroyo’s rule.
Both Trillanes and Lim were implicated in previous attempt to oust Arroyo, who they accused of corruption and fraud in the May 2004 elections.
“We are trying to make plans here. I want to appeal for calmness and for the public not to allow to be hoodwinked by these people, Trillanes and Lim. We must not allow them to grab power,” Esperon said.
Esperon was in Zamboanga City visiting troops when news of the uprising broke out in a middle of meeting at the Western Mindanao Command headquarters.
Trillanes and Lim have urged the Armed Forces of the Philippines to withdraw its support from the Arroyo administration.
Esperon said the military is control of the situation and ordered security forces to resolve the situation without bloodshed.
“There is a confrontational effort and I have given instructions to ground commanders to address the situation without bloodshed, but if situation arises we will do what is necessary. We intend to terminate this situation as soon as possible,” he said.
“Rest assured we are in full control of the situation. Just be calm about it and we should be able to resolve this situation. It is something we can address.”
Esperon said the AFP is solid behind Arroyo and would not allow the uprising to continue. He said the military has been put in red alert and warned soldiers not to support Trillanes and Lim.
“There is no need to conduct loyalty check among troops. I am in constant touch with senior commanders. I salute the solidarity of the Armed Forces of the Philippines. We are intact and ready to enforce legal actions to address the situation in Makati,” he said.
Government spokesmen also taunted Guingona, saying, he was too frail to be jailed.
Guingona is one or Arroyo’s most vocal critic and had previously joined protest rallies in Manila. (Mindanao Examiner)
Posted by The Mindanao Examiner Regional Newspaper at 5:13 PM