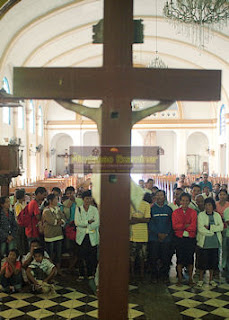 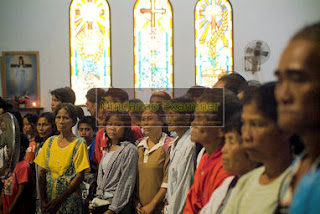 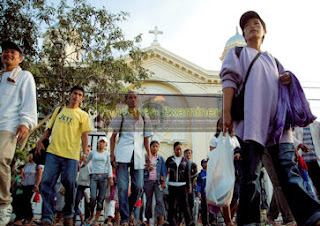 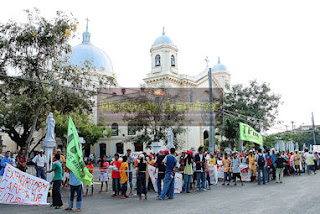 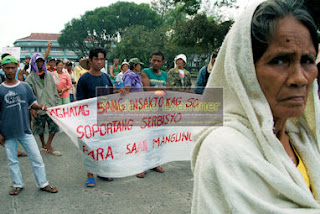 Negros farmers and their families hear mass Wednesday, January 30, 2008 at the San Diego Cathedral in Silay City. The farmers, who march around the provinces beginning Monday, have appealed to Philippine leader Gloria Arroyo to prolong Comprehensive Agrarian Reform Program. (Photos by VJ Villafranca)

BACOLOD CITY, Philippines (Mindanao Examiner / Jan. 30, 2008) - Peasant federation Task Force Mapalad (TFM) has called on President Gloria Arroyo to certify as urgent the bill that will extend the Comprehensive Agrarian Reform Program (CARP) to compel Congress to stop delays and hasten its enactment.
Some 3,000 people, mostly farmers, marched on Wednesday for third straight day to dramatize their appeal for extension of the CARP law.
“President Arroyo should certify the bill as urgent. Some congressmen are making alibis to delay CARP extension. Some have proposed to hold a series of public hearings. All they wanted was to delay, so that when CARP expires in June, they can forget about the legislation,” TFM president Jose Rodito Angeles said in a statement sent to the Mindanao Examiner.
Farm workers and advocate groups, including representatives from the religious sector and civil groups and the youths from all over Negros island joined the 200-kilometer march to Bacolod City.
Farmers called on the three Negros solons, Representatives Monico Puentebella of Bacolod City, Jeffrey Ferrer of 4th District, and Ignacio Arroyo of 5th District to help in the passage of the bill. (Lani Factor and Heidi Fernandez)
Posted by The Mindanao Examiner Regional Newspaper at 6:49 PM