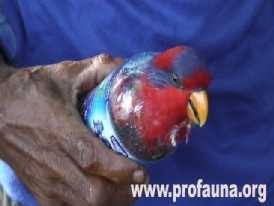 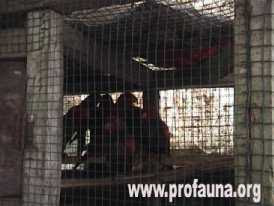 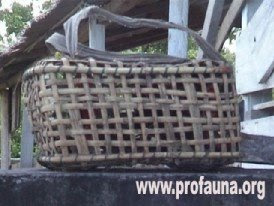 The already dwindling population of Indonesian parrots due to deforestation is further threatened by poaching. About 10,000 parrots (Lories and Cockatoos) are caught from the wild in North Halmahera, Indonesia, each year to supply the domestic and the international illegal wildlife trade.
In their latest report entitled ‘PIRATED PARROTS’, the Indonesian wildlife protection NGO ProFauna Indonesia, revealed the evidence on the smuggling of wild caught parrots in Sulawesi and North Halmahera in Indonesia to Philippines during their investigation.
The investigation, which was supported by the Royal Society for the Prevention of Cruelty to Animals (RSPCA) and conducted in 2007, uncovered the parrot smuggling network from Indonesia to the Philippines. The parrots poached in North Halmahera are; white Cockatoos (Cacatua alba), chattering Lorys (Lorius garrulus), Eclectus parrots (Eclectus roratus) and the violet-necked Lorys (Eos squamata). The Eclectus parrot is a protected species which is prohibited for trade.
The catch quota of white cockatoos (Cacatua alba) for 2007, issued by the General Director of PHKA, of the Indonesian Forestry Department, is 10 pairs and only for breeding purpose. However, the investigation revealed that at least 200 white Cockatoos were caught from the wild in North Halmahera in 2007, which far exceeded the quota.
The red-and-blue Lorys (Eos histrio), endangered species, are also being smuggled. Fortunately, the red-and-blue Lory poaching and trade have decreased drastically due to active confiscation operations conducted by the forestry department rangers in 2005.

The local authority’s regulation in the villages in Karakelang Island, an island in Talaud Islands group, bordering Indonesia and Philippines, prohibits the poaching of red-and-blue Lory. Thus helps reduce the trade.
Most of the Indonesian parrots come from Halmahera Island, North of Maluku. 40% of them are smuggled to the Philippines from the port in Pelita Village, Galela District in northern Halmahera. An illegal wildlife dealer named Mei Lumombo operates from there. He smuggles the birds to Balut Island or to General Santos, in the Philippines, using a private boat.
The sea journey alone to smuggle parrots from Halmahera, Indonesia to General Santos, in the Philippines takes 9 hours. The journey from the forest to villages and to the port also takes a long time. Most boats carrying the smuggled Indonesian parrots do not dock at the General Santos port to unload.
The transactions are done offshore or in the sea, where the Philippines dealers collect the parrots from the Indonesian ships. Upon arrival at General Santos, the birds are sent to Cartimar market, in Manila, the capital of the Philippines.
The parrot’s death rate is as high as 40 % by the time they arrive at the sales points. For every 1000 parrots caught from the wild, 400 birds died in vain, during the poaching, transportation and trade, due to poor conditions and cruel handling.
The parrot smuggling to the Philippines breaks the CITES (Convention of International on Trade in Endangered Species) agreements, ratified by Indonesia in 1978. Most parrots are listed in Appendix II. Parrots in CITES Appendix II are prohibited from international commercial trade unless they are captive bred or permitted by the exporting country. In Indonesia the bird trade is controlled by the catch quota. Parrots in the trade are not captive bred.

From the interviews with some animal traders in Cartimar market in Manila, the Philippines, ProFauna uncovered that some of the birds smuggled from Indonesia were intended for export to other countries and to be labelled as captive-bred. It is therefore necessary for the Philippines authority to control and check the parrot breeding centre and the source of parrots for export.
The illegal trade of protected parrots violates the Indonesian legislation of the 1990 (a wildlife law concerning Natural Resources and the Ecosystems Conservations). Accordingly, the perpetrators are liable to a maximum five-year prison term and a maximum 100 million Rupiah fine. Unfortunately, the Indonesian governments has not enforced the law because many protected parrot are still being smuggled abroad and sold openly in Surabaya, East Java, Indonesia.
At least once in every two weeks there is a freight vessel that dock at Surabaya sea port, transporting illegal parrots. There are about 30 birds of various species being smuggled to Surabaya per shipment. From the data collected by ProFauna about animal markets in Java and Bali, the domestic trade in parrots is still at a high level. The most wanted species is the black-capped Lory (Lorius lory), the second is the sulphur-crested Cockatoo (Cacatua galerita) and the third is the Eclectus parrot (Eclectus roratus).
Tri Prayudhi, ProFauna’s Campaign Officer stated, ” The Navy of Indonesian Armed Force (TNI) and the Indonesian Marine Police must improve the patrol of marine boundaries between Indonesia and the Philippines seas and the route used for wildlife smuggling from Indonesia to Philippines”. ProFauna strongly recommends that both Indonesian and the Philippines governments implement and enforce their wildlife laws.
In addition to the necessity of law enforcement to stop the illegal parrot trade, ProFauna urges the Indonesian government to raise the status of white Cockatoo (Cacatua alba), endemic species of Northern Maluku as Indonesian protected species.
EDITOR’S NOTES:
* ProFauna launches PIRATED PARROTS report on the 22nd May 2008 in Jakarta, Indonesia. The report is complemented with a 14-minute film (VCD/DVD) about the Indonesian parrots being smuggled to the Philippines and to the Indonesian domestic trade level. For further information, please contact Butet A. Sitohang, International Communication Officer, mobile: +6281333899741 or email: international@profauna.org

* ProFauna Indonesia (http://www.profauna.org/) is a wildlife protection organization in Indonesia, established in 1994. ProFauna becomes the largest wildlife protection organization in Indonesia with 500,000 member and supporters. In 2002, ProFauna launched a report called Flying Without Wings about the illegal parrot trade in Papua and North Maluku, Indonesia.
Posted by The Mindanao Examiner Regional Newspaper at 6:03 PM