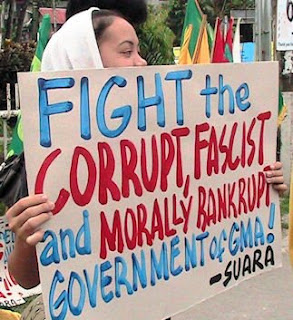 MANILA, Philippines (Mindanao Examiner / July 28, 2008) – Militant groups and political activists criticized the Arroyo government for ordering the suspension of classes in many schools Monday in Manila which coincided on the President’s State of the Nation Address.
The government suspended classes in many schools in Manila because of the typhoon IGME, whose international code is FUNG WONG.
Militant groups accused the government of preventing students to join a massive rally to protest Arroyo’s failure to bring down high gas prices and rising cost of basic commodities
Filipino weather experts said the typhoon was heading to Taiwan.
Leaders of the militant groups BAYAN and its affiliates said they will stage simultaneous rallies in key cities and provinces in the country during Arroyo’s address.
Arroyo, accused by opposition politicians of cheating and electoral fraud in 2004 Presidential elections and whose administration has been involved in many corruption scandals, is extremely unpopular in the Philippines. (Mindanao Examiner)
Posted by The Mindanao Examiner Regional Newspaper at 8:16 AM

Those who raise gas prices are already killing our children. Take back our country! Acquire the Red Alert Newsletter.