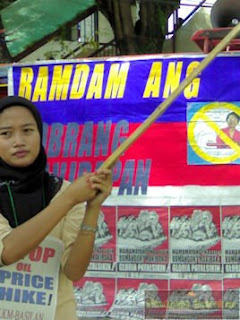 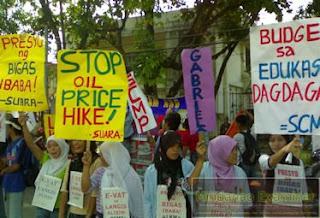 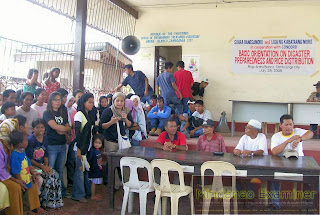 Photos released to the Mindanao Examiner by the Suara Bangasamoro and Liga ng Kabataang Moro show its members before they were dispersed by government soldiers and policemen and City Hall personnel in Zamboanga City on Monday, July 28, 2008.
ZAMBOANGA CITY, Philippines (Mindanao Examiner / July 28, 2008) – Soldiers and policemen broke up Monday an anti-Arroyo rally in the southern Philippine city of Zamboanga, which coincided with President Gloria Arroyo’s State of the Nation Address, organizers said.
Amira Lidasan, of the human rights group called Suara Bangasamoro, said policemen dispersed dozens of students and political activists who were holding a rally to protest the high prices of basic commodities and the poverty situation of the country under Arroyo’s seven-year rule.
“We are just expressing our sentiments, but apparently there is no freedom of expression and speech in Zamboanga City. City Hall ordered the police to break up the rally,” Lidasan told reporters.
Police said the rally had no permit and students were obstructing traffic near the Western Mindanao State University. Lidasan said the local government previously rejected their application to hold peaceful rallies in Zamboanga.
“How can we have a permit when City Hall is not granting us such permission? We were threatened with arrest by soldiers and policemen. They threatened to seize our vehicles if we do not disperse or stop our rally,” Lidasan said.
She said Elmer Apolinario, a senior City Hall official, led the dispersal of the rally.
Prior to the dispersal, Apolinario told a local radio station DXRZ Radyo Agong that the rally had no permission and ordered security forces to disperse the protesters.
Lidasan said they had been holding rallies in Zamboanga City every time Arroyo delivers her State of the Nation Address and it was the first time local authorities stopped them.
One protester, Abdel Abdulkarim, said only anti-Muslim or anti-ARMM protests or pro-government rallies are allowed in Zamboanga. “This is unfair. We have our rights too,” he said.
Abdulkarim was referring to the Autonomous Region in Muslim Mindanao. Local officials in the past had opposed any conference of the ARMM in Zamboanga City and would tell organizers to bring their meeting elsewhere, like in Cotabato City or areas covered by the autonomous region.
The ARMM is composed of Sulu, Basilan, Tawi-Tawi, Lanao and Maguindanao provinces. Sulu, Basilan and Tawi-Tawi which are near Zamboanga City have contributed largely to the bulk of the local economy.
Most of the elected officials in Zamboanga City were former members of the opposition party Laban ng Demokratikong Pilipino, but have allied themselves with Arroyo’s own Kabalikat ng Malayang Pilipino party after a merger last year.
Militant groups led by Bayan and other farmers’ organizations also held simultaneous protest rallies in key cities in Mindanao.
“President Arroyo should think twice before letting out promises that are already nailed even before she even finishes her SONA. Since 2001, she has promised cheap rice, prosperous farmers, and rice self-sufficiency. Now we dare her to look at the landless farmers eating root crops, bananas or nothing at all.”

“Look at the paupers in the street as they are made to beg for two kilos of rice which has tripled in cost,” said Tony Salubre, acting spokesperson of the Farmers Association of Davao City.

“Under GMA, this country has gone through the worst economic and political tragedy that this nation has never experienced before. The immorality, corruption, militarism and puppetry that have become the central policy of this regime, has made us the sick man of Asia that we are today,” Arnado said.

The Kawagib Moro Human Rights group also assailed Arroyo’s pro-poor program and her failure to stop the rising cost of fuel and rice in the country.

“Arroyo’s so-called pro-poor programs such as ‘Ramdam ang Kaunlaran’ and ‘Katas ng VAT’ as well as the mushrooming of foreign capitalists in the country, will again be the frontage of her rhetoric in the pretext of helping the Bangsamoro and Filipino people.”

“But the truth continues to hunt the poor people. In a survey of Social Weather Station, 50% of the 88.9 million Filipinos are ‘self-rated poor’ and 14.9 million experiences hunger everyday while prices of oil and basic commodities continue to skyrocket. Cases of human rights violations are also continuing while the Bangsamoro people’s right to self-determination is not recognized,” it said.

Jose Maria Sison, founder of the Communist Party of the Philippines (CPP), said Arroyo has such a long record of lying that no one expects her to describe the real state of the nation and indicate the solutions to the problems that have grown terribly worse under her regime.
“She is ever more determined to lie in a vain attempt to evade responsibility for the extremely aggravated suffering of the Filipino people. But reality cries far louder and clearer than her lies. These add insult to injury. And the outraged people become ever more resolute and relentless in their struggle.”
“Arroyo is poised to claim that she has nothing to do with the crisis of the domestic ruling system and that this is simply the result of external factors that would soon blow away. She is likely to repeat her lie that the economy continues to grow and that she has already laid the basis for the Philippines to become a "first world country" in the next twenty years, even as she has not undertaken any program of national industrialization and land reform,” he said in a statement released on Monday.
The New People’s Army, CPP’s military wing, have been fighting the democratic government the past four decades for the establishment of a Maoist state in the Philippines.
It broke off peace talks with the Arroyo government in 2004 after rebel leaders accused Manila of reneging on previous agreements, among them the release of all political prisoners and to put a stop on the extra-judicial killings of political activists in the Philippines.
Arroyo, accused by opposition politicians of cheating and electoral fraud in 2004 Presidential elections and whose administration has been involved in many corruption scandals, is extremely unpopular in the Philippines. (Mindanao Examiner)
Posted by The Mindanao Examiner Regional Newspaper at 11:22 AM