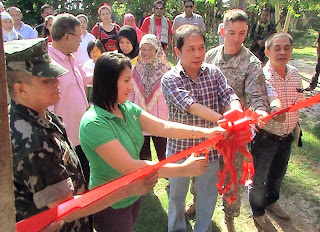 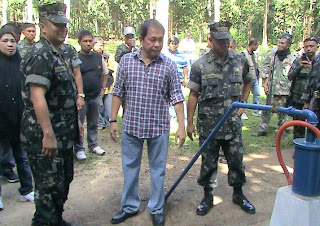 Philippine Marines Maj. Gen. Juancho Sabban and Sulu Gov. Sakur Tan during the inauguration of various development projects in the Sulu province. (Philippine Marines Photos)
SULU, Philippines (Mindanao Examiner / August 29, 2008) – Philippine and United States soldiers have finished various development and infrastructure projects in the southern Sulu province, officials said Friday.
Officials said the projects, which were inaugurated Thursday, are part of joint undertakings with the Sulu provincial government and will benefit the civilians in the town of Patikul.
Maj. Gen. Juancho Sabban, a Filipino marine commander, said four artesian wells have been handed to local officials in the villages of Timpook, Taung, Tanum, and Liang, all in Patikul town.
Aside from the wells, military and provincial officials, led by Gov. Sakur Tan, also inaugurated a new school building in the village of Bonbon and two road projects in Liang and Bud Datu, also in Patikul.
“The inaugurations are the result of successful unity of efforts among the Joint Task Force Comet, Joint Special Operations Task Force-Philippines and the Provincial government in accomplishing these humanitarian goals,” Sabban said.
Sabban said while development is the primary responsibility of the local government, there is growing recognition on the significant benefits derived from partnership and teamwork in the delivery of basic services to the people.
“We believe in a teamwork approach in fulfilling the aspirations of our people towards access to basic necessities. The people’s welfare has always been our top priority, and is one to which the military has devoted time and energy.”
“The local government officials deserve commendation for their unrelenting support. And though there are still a variety of development challenges, we are very certain that we can brave the odds with everyone’s continued cooperation,” Sabban said.
Tan, for his part, said he would continue supporting various military humanitarian activities. “We will support efforts of the military, both from the Philippines and the United States, to bring about change and hope for brighter future through humanitarian activities and infrastructure and development projects across Sulu. With the cooperation of the people, we are sure Sulu will be one of the peaceful places in southern Philippines,” he said.
The provincial government, Tan said, has lined up various development projects in mostly poor areas in Sulu’s 19 towns. In April, Tan funded the construction of at least 50 bamboo houses, worth over P26,500 each, for poor Badjao families in Tandu Bato in Luuk town.
The project called “Operation Kandili – Preserving a unique culture through providing homes for the Badjao,” is a partnership between the Philippine Marines and the Sulu provincial government.
At least 50 more bamboo houses in Luuk town will be constructed soon, including basketball courts in the villages and Tan pledged to release more funding for education and poverty alleviation programs.
”We have been funding and implementing a lot of projects in Sulu and all these are part of our peace and development programs. We want a culture of peace and this can be achieved through education and basic infrastructure projects and with the participation of course, of the people themselves,” he said.
The US military was also represented by Maj. Joseph Mouer. (Mindanao Examiner)

Posted by The Mindanao Examiner Regional Newspaper at 2:55 PM