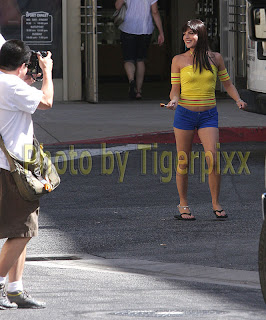 SEPTEMBER 23, 2008: Selma Blair films 'Kath & Kim' at the Burbank Media Center Mall. On this Tuesday, a group of photographers found themselves working on the set of the new TV show "Kath & Kim" starring the gorgeousSelma Blair.
The film set was inside the Burbank Media Center Mall in Burbank, Calif. Jack Carter of Tigerpixx took this photo as I was taking Selma's picture when she exited the mall to go to her trailer after shooting a scene. As usual security on the set and inside the mall was very tight.
The photographers had to constantly move around to avoid detection. Early on I was caught by mall security taking pictures of Selma and her co-star Molly inside the mall and was asked to leave.

I pretended to leave and found a good spot inside Macy's with a group of photographers to continue taking pictures. Overall, Selma was very accommodating: smiled at the cameras and even waving at us a few times as we prayed that she would not blow our cover in our hiding spot inside Macy's. (Mindanao Examiner: John Shinn III, a proud Zamboangaueno, is the owner of the PaparazziNotebook.com and publisher of the LAZamboangaTimes.com.)
Posted by The Mindanao Examiner Regional Newspaper at 12:39 PM