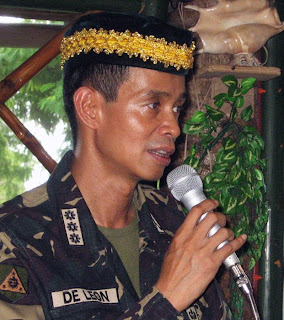 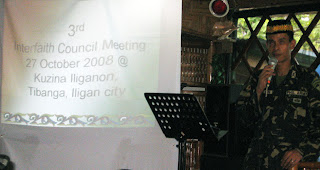 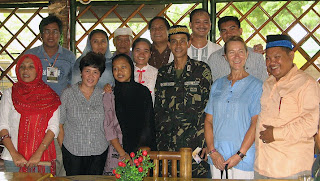 Colonel Benito de Leon, commander of the Philippine Army's 104th Infantry Brigade,and honorary sultan in Mindanao, speaks to participants to the 3rd Interfaith Council Meeting held on October 27, 2008 in Iligan City, the capital of Lanao del Norte province. De Leon, a decorated officer, spoke about the importance of interfaith among Filipinos in achieving peace and unity. Other resource speakers and participants also pose for photo with De Leon.
ILIGAN CITY, Philippines (Mindanao Examiner / Oct. 28, 2008) – The Philippine Army said it will continue to support efforts of civil society groups and non-government organizations to bring about peace and unity in Mindanao.
The Army is actively campaigning to bring tranquility in the troubled region and has embarked in various peace and development programs in partnership with different government agencies, non-government and civil organizations.
Col. Benito de Leon, commander of the 104th Infantry Brigade, who was invited Monday to speak at a forum by the civil society organization called Pakigdait Inc., said the Army is supporting government efforts to sustain peace and development in Mindanao and at the same time ensure the safety of civilians from lawless groups.
“Your military will always give high priority in ensuring the protection of the Filipino citizens whether they be Christians, Muslims, Lumads, or otherwise,” De Leon told participants to the 3rd Interfaith Council Meeting held in Iligan City.
The forum was attended by traditional and religious leaders headed by Rev. Fr. Regino Quijano, the Pakigdait chairman and Musa Sanguila, who heads the Civil Society Organization of Lanao del Norte Partnership for Peace and Development.
De Leon praised both groups for helping dozens of families, displaced by in the past by rebel hostilities, to return to their homes in Lanao del Norte’s Kauswagan town.
Troops have been deployed in the province to help local police forces pursue rogue Moro Islamic Liberation Front rebels and maintain peace and order.
“Even as we pursue these lawless groups, we shall strictly abide by the instructions of minimizing collateral damage and in upholding the rights of the people as guaranteed in our Constitution,” De Leon said.
De Leon also briefed participants about the security situation in Lanao del Norte and other areas nearby and lauded the support of provincial and local government officials to the military’s efforts.
He also praised Muslim and Christian religious organizations which continue to play an active role in hastening the return of peaceful conditions in Lanao del Norte.
In 2000, De Leon was conferred the honorary title of “Sultan a Romapunut,” which literally means “Leader of Peace” in Lumbayanague in Lanao del Sur province because of his various conflict prevention and peace building efforts in the past in Mindanao. (Mindanao Examiner)
Posted by The Mindanao Examiner Regional Newspaper at 10:10 AM