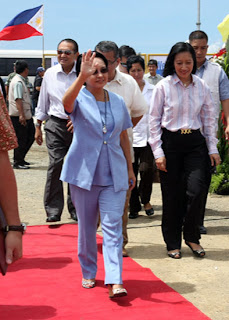 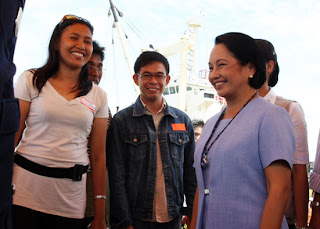 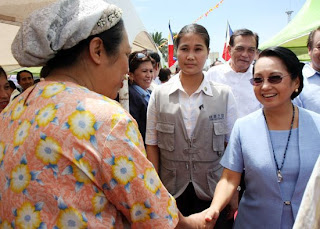 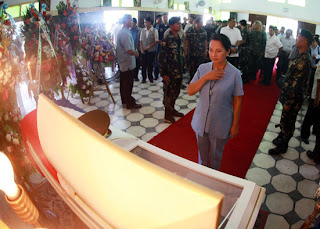 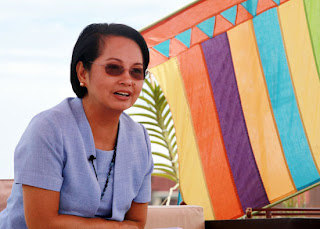 Arroyo inspected a 1.8-ha. reclamation project at the port of Zamboanga. The project is worth more than P700 million. If completed, the port would be able to receive more ships plying Mindanao. Arroyo later spoke with reporters. She also met with three kidnapped local teachers recently freed in Basilan province.

Presidential Assistant for Mindanao Affairs Crisanto dela Cruz and Zamboanga City Rep. Maria Isabelle Salazar were among those who welcomed Arroyo at the Philippine Air Force base.

While in Zamboanga, Arroyo spoke about her childhood memory of the city and saw how it transformed to what it is now – a highly urbanized city.

Arroyo is to step down next year when her term ends, but her allies in Congress, led by House Speaker Prospero Nograles, are campaigning to amend the Constitution and at one point proposed to turn the lower house into a constituent assembly that would tackle changes in the fundamental laws on the land.

Arroyo's allies said the change in the Constitution is needed to introduce reforms in the economy, among others.

Under the presidential form of government, Arroyo is allowed only one six-year term. In the charter change proposal suggested by her political allies who dominate Congress, she can be elected as prime minister should Congress dissolve the Senate and change the system of government to parliamentary and eventually prolong her into power beyond 2010.

Arroyo’s political party Kampi on Thursday merged with the country’s two major parties - Lakas and CMD – and declared that the merger is a strong assurance of to administration's resolve and determination to push through with the national and local elections in 2010.

Arroyo deposed President Joseph Estrada in a people power revolution in 2001, but corruption scandals in her government and allegations of poll fraud has made her extremely unpopular among Filipinos. (Mindanao Examiner)

Posted by The Mindanao Examiner Regional Newspaper at 2:32 PM