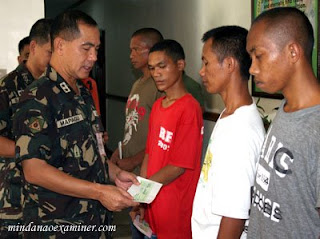 A photo released by the Philippine Army shows Major General Reynaldo Mapagu, commander of the 10th Infantry Division in Mindanao, hands over cheques to New People's Army rebels who surrendered Tuesday, July 28, 2009 to the military after a series of negotiations. The army says a total of 152 NPA rebels have surrendered the past six months in southern Mindanao region. (Mindanao Examiner)

DAVAO CITY, Philippines (Mindanao Examiner / July 29, 2009) – Some 152 communist rebels have surrendered to the military in the southern Philippines the past six months after a series of negotiations, officials said Wednesday.

Army Captain Rosa Maria Cristina Manuel, a spokeswoman for the 10th Infantry Division, said the rebels, who were members of the New People’s Army, had also surrendered 32 assorted weapons, mostly rifles, and were provided livelihood aid as part of the government’s amnesty program.

“The former rebels who availed the government’s Social Integration Program ensures them of livelihood benefits that aims to help them return into the mainstream of the society and live with their families,” Manuel told the Mindanao Examiner.

Under the program, NPA rebels who surrender to the government will receive P20,000 each on top of P50,000 paid for their M16 rifle. Rebels are also given livelihood skills training and aid worth P50,000 for them to start their own business.

Major General Reynaldo Mapagu, aA regional army commander, urged rebels to surrender peacefully and avail of the government offer of amnesty for them to start a new life.

“We are moving forward towards peace and progress. This is the first step to the healing process and I am sure we are getting closer to achieving our goal of getting our brothers back into the folds of the law so that as one nation, we can jointly step forward to development.”

“We call on our brothers still on the mountains to go back into the folds of the law and give peace a chance. Our government is sincere in reaching out to them and we are waiting to give them the care and necessary help they need in order for them to enjoy a peaceful life with their families. We are all Filipinos and the only way for us to gain progress is to have lasting peace,” Mapagu said.

But Fidel Agcaoli, chairman of the Human Rights Committee of the National Democratic Front of the Philippines, has branded the Social Integration Program as a money-making scheme for corrupt military commanders.

“The so-called Social Integration Program is nothing but a money-making scheme for Armed Forces of the Philippines field commanders to buy their loyalty to the Gloria Arroyo regime and project through press releases the image of making strides in the regime's much vaunted objective of wiping out or rendering irrelevant the New People's Army by 2010,” Agcaoili said.

“These rebel returnees are actually local AFP agents and assets or civilians forcibly conscripted and coerced by the AFP to take part in elaborate surrender ceremonies and SIP graduation rites presided over sometimes by the fake president herself,” he added.

Agcaoili said the government allegedly spent P18.8 million last year for the bogus program. “In truth, the fake surrenderors retain only a little amount of that money while the huge chunk of the bounty goes to the pocket of field commanders and AFP officials," Agcaoili said.

The army spokeswoman denied Agcaoili’s accusation and branded them as propaganda to cover the truth about the surrender of many rebels to the government.

“There are a lot of process and safety measures in the granting of livelihood aid and assistance to the rebels who surrender to the military. We make sure that those who surrender are genuine members of the New People’s Army. All the funding released by the government for the Social Integration Program undergoes strict and regular audit procedures,” Manuel said.