Filipinos want US out of Mindanao 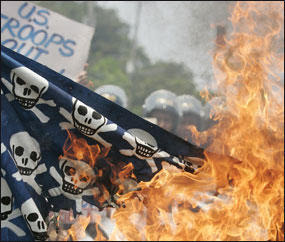 Protesters set fire to a modified US flag outside the US embassy in Manila. (Morning Star)

Progressive forces in the Philippines have urged Manila to scrap a military deal with the US after former officials testified that US soldiers have been fighting in Mindanao in violation of the country's constitution, according to a report by the British newspaper Morning Star.

Under a Visiting Forces Agreement (VFA), hundreds of elite US troops have been deployed in half a dozen locations in the southern Philippines since 2002, ostensibly to train and advise Filipino troops fighting Islamist militants and the Maoist New People's Army.

On Thursday retired Philippine navy lieutenant Nancy Gadian testified at a congressional hearing that US troops based on Mindanao were embedded with Filipino units in combat situations.

The Philippine constitution bars foreign troops from fighting in the country, which was a US colony until 1946.

Senator Miriam Defensor-Santiago, who heads the foreign relations panel at the upper house of Congress, said that the government must end the VFA and renegotiate a new security deal with the US.

Ms Santiago said: "If the US wants to use Philippine territory in its alleged war on terror, they will have to negotiate a treaty with the Philippines.

"In the meantime, in my humble view, the presence of US troops in Mindanao, and even worse, their participation in combat operations, are illegal."

In a petition filed with the country's high court seeking the nullification of the VFA, former Senate president Jovito Salonga and the left-wing Bayan organisation claimed that "the purpose of the US troops' stay in the country is beyond training and capability building."

The petition cited an August 20 article in the New York Times stating that US Defence Secretary Robert Gates had decided to extend the stay of 600 US commandos in Mindanao.

Mr Gates was quoted as saying that US military support "has been instrumental in killing and capturing leaders of militant groups and anti-government organisations."

But US embassy spokeswoman Rebecca Thompson insisted that "US forces are not involved in combat operations."

Ms Thompson said that the US troops on Mindanao were on "temporary deployment at the invitation of the Philippine military and government."

And Filipino cabinet chief Eduardo Ermita argued that the VFA should stand, saying that, since the deal was signed in 2000, Washington had poured an average of two billion pesos a year (£25 million) into the Philippines.

Mr Ermita, a retired army general, said: "For the moment, we are for the stay of the VFA - it provides proper security balance and stability in the Philippines."