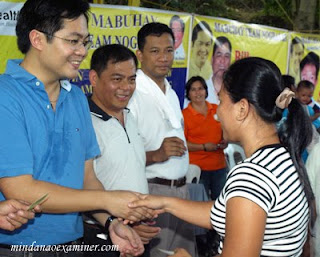 Nograles said he and his father have lined up various projects this year that includes a P60-million, 7,000-seat air conditioned Sports Center inside the University of Southeastern Philippines campus.

He said Davao City, a prime tourist destination in the southern Philippines, could be like Makati City, the country’s financial center, only if the locals would strive harder and work together for the common good.

Nograles said Davao City could even be more progressive than Makati which boasts of free hospitalization, health care and education to local residents.

“We are already doing that in Davao City. The House Speaker has many programs for the poor, not only on education, hospitalization or health care, but even more. We have pro-poor programs because we know that a lot of people needed help,” the young lawyer said.

The Nograleses have more than 15,000 scholars and for medical care, the father and son tandem already distributed thousands of PhilHealth cards aside from various improvements and rehabilitation of the regional hospital.

The solon also helped fund road network and other infrastructure projects in Davao City, especially in the first congressional district where the House Speaker belongs. (With reports from Geo Solmerano and Romy Bwaga)
Posted by The Mindanao Examiner Regional Newspaper at 6:56 PM