Moro rebel linked to bombings is captured in Mindanao 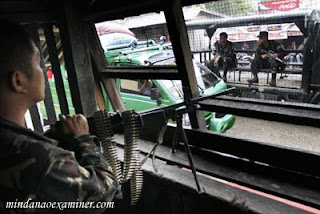 Colonel Jonathan Ponce, a spokesman for the Army’s 6th Infantry Division, said Badrudin Dalungan was held at a checkpoint on Wednesday in Cotabato City near Maguindanao province.

He said Dalungan is a member of the MILF’s special operations group tagged as behind the 2007 bombings in Kidapawan that killed and wounded several civilians.

“MILF-SOG Badrudin Dalungan was arrested on Wednesday afternoon at a checkpoint in Cotabato City. (He has) warrants of arrest for multiple frustrated murder in connection to the series of blasts in Kidapawan City in 2007,” Ponce said.

He said Dalungan’s arrest came a day after security forces also captured Camarudin Hadji Ali alias Commander Mudi at the house of one his wives in Cotabato City after a long intelligence and surveillance operations.

Ali is a leader of the MILF’s 105th Base Command under Ameril Umbra Kato and they are both wanted for the series of deadly attacks last year in Mindanao, according to Ponce.

He said the rebel leader has a bounty of more than a million pesos for his capture.

Early this month, troops captured Benjamin Esmail Satol, an alleged member of the MILF’s special operations group linked to the July 5 bombing outside a Catholic church in Cotabato City. At least five people were killed in the attack.

Satol was held at an army checkpoint in the village of Makir in Datu Odin Sinsuat town after soldiers seized a hand grenade from his bag.

Peace talks collapsed in August last year after rebel and government negotiators failed to sign a homeland deal which the Supreme Court ruled as unconstitutional.

President Gloria Arroyo resumed the peace talks this year in an effort to put an end to bloody fighting in Mindanao. (Mindanao Examiner)
Posted by The Mindanao Examiner Regional Newspaper at 10:12 PM