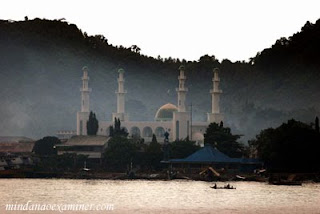 ZAMBOANGA CITY, Philippines (Mindanao Examiner / September 22, 2009) – Philippine troops backed by US military intelligence on Tuesday continue to hunt for Abu Sayyaf and Jemaah Islamiya militants in the southern island of Sulu, where dozens of rebels and soldiers were killed in fierce clashes since last week, officials told the Mindanao Examiner.

Mauiya, believed to an Indian national, was among those previously tagged by the Philippine authorities as behind the kidnappings early this year of three international Red Cross workers in Sulu. But little is known about Quayem.

“Our forces are pursuing the Abu Sayyaf and JI terrorists. We will get them sooner or later,” Dolorfino said.

He said at least 34 Abu Sayyaf militants and 8 soldiers were killed in the fighting since Sunday in the hinterlands of Indanan town. Among those killed on the side of the Abu Sayyaf was Ustadz Muktar, a cousin of Hapilon, whom is wanted by the US for terrorism.

But US Special Forces are deployed in Sulu province since 2006 and assisting the local military in defeating the Abu Sayyaf.

Police are also on alert for retaliatory attacks by the Abu Sayyaf after security forces captured one of their main camps in Indanan town.

Chief Inspector Usman Pingay, head of police in the capital town of Jolo, said he had received intelligence reports that the Abu Sayyaf plans to attack after their largest camp on the island was overran by troops.

He said police had set up more road checkpoints and were conducting more foot patrols.

“We are in heightened alert. We have intelligence reports that the Abu Sayyaf may launch an attack in Jolo, probably as retaliation to the ongoing military offensive,” Pingay told the Mindanao Examiner by phone from Jolo.

The seized Abu Sayyaf camp was near to the base of former Moro National Liberation Front rebels, who were believed coddling the militants, according to Dolorfino.

“The Abu Sayyaf camp was a convenient sanctuary because of the presence of the MNLF base and some former rebels are protecting these terrorists because either they are relatives or family members,” he said.

The MNLF signed a peace deal with Manila in September 1996, but many former guerrillas were disgruntled with the accord, saying, the Arroyo government failed to comply with some of its provisions and uplift their standards of living. They accused Manila of failing to develop war-torn areas in the south.

Under the peace agreement, Manila would have to provide a mini-Marshal Plan to spur economic development in Muslim areas in the south and livelihood and housing assistance to tens of thousands of former rebels to uplift their poor living standards.

Many of the former MNLF fighters have joined the Abu Sayyaf and the larger Moro Islamic Liberation Front, which is now negotiating peace with the government. (Mindanao Examiner)
Posted by The Mindanao Examiner Regional Newspaper at 1:51 PM