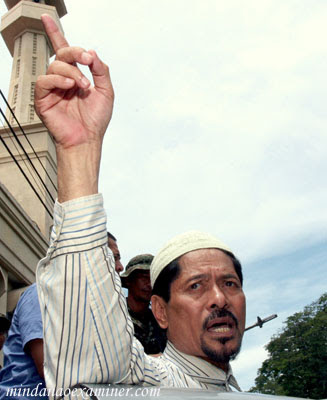 Misuari’s letter to the Organization of Islamic Conference critical of the government could be considered a violation of his 2008 bail order, Executive Secretary Leandro Mendoza said.

Misuari criticized the Arroyo administration for its alleged failure to fully implement the peace agreement that the MNLF signed with it in 1996, and a source said it made Mrs. Arroyo very angry on Tuesday.

The OIC is hosting a tripartite meeting in Libya, ahead of the June 30 change of administration in the Philippines, to preserve the gains of the peace agreement between Manila and the MNLF.

“The President has instructed the Department of Justice to study the possible revocation of Misuari’s bail,” Mendoza said.

“The recommendation of the National Security Council-Cabinet cluster is to sanction Misuari.”

Mendoza was the chief of the National Police when Malaysia turned over Misuari to Philippine authorities in 2002. He fled to Malaysia in 2001 after allegedly leading an attack on government troops in Sulu, where some 100 people were killed. He was later charged with rebellion.

Misuari’s bail order bars him from engaging in any political activity, or from participating in any action “inimical to the Philippine government” while in a foreign territory.

“He is in Libya now, and he is badmouthing the country,” Mendoza said.

An official described Misuari’s move as “treacherous,” because he handed his letter in Tripoli just as he was about to sign a deal with the Philippine government for the continued implementation of the 1996 peace agreement.

Still, both sides signed the deal and agreed to work on legislative measures to enhance the Autonomous Region in Muslim Mindanao, the MNLF’s homeland. (Joyce P. Pañares - Manila Standard Today)

I wish that Chairman Misuari could be more careful next time and perhaps say his frustration in a subtle manner.

We know that, in his heart, Chairman Misuari, only wants the best outcome for his people, and for me that is understandable. However, having put into a condition on how he should present himself and his constituent in various fora should be made with more subtlety, and could still deliver effectively his message in a different, non-offensive and diplomatic ways