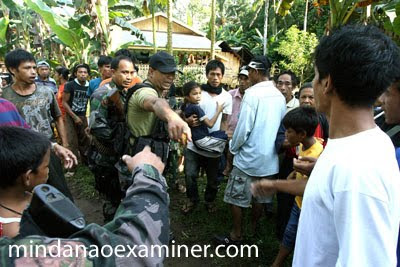 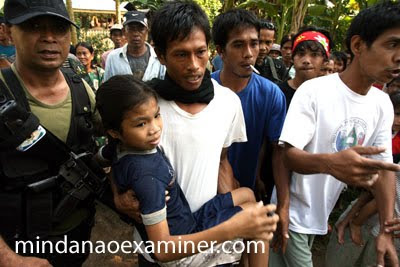 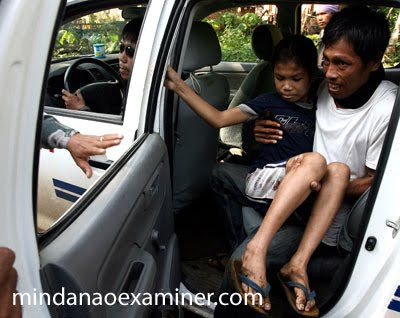 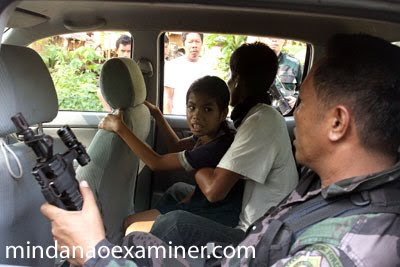 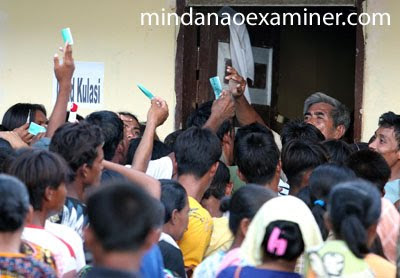 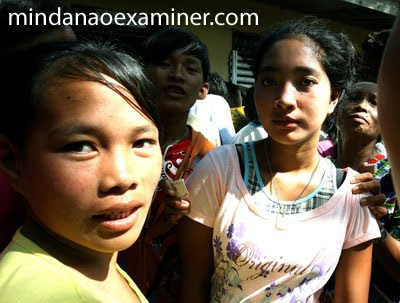 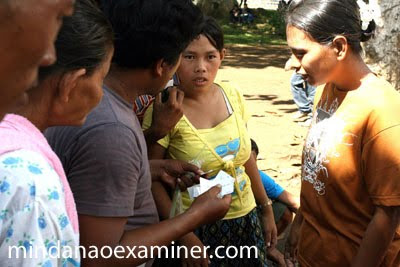 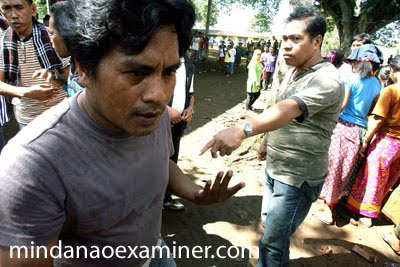 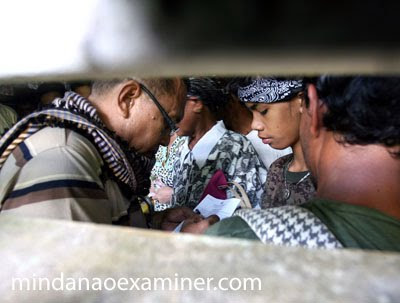 A man carries a wounded girl, Marsalin Sangkula, who was injured after a rifle grenade exploded Monday, October 25, 2010 near the Sultan Mohamad Jamalul Kiram Central School in Maimbung town in the southern Philippine province of Sulu during the village elections. (Mindanao Examiner)

An unidentified man fills out a ballot for a boy who was allowed to cast his vote Monday, October 25, 2010 during village polls in the southern Philippine province of Sulu. (Mindanao Examiner)

An unidentified man allegedly caught bringing unregistered voters during Monday’s village polls in Sulu province in the southern Philippines ran away from this man who confronted him. (Mindanao Examiner)

An unidentified man gives instructions to unregistered voters during Monday’s village polls in Sulu province in the southern Philippines. The man was later confronted and ran away. (Mindanao Examiner)

A follower of a village chieftain in the southern Philippine province of Sulu calls on their supporters to cast their votes in Kulasi using only a piece of paper as their identification cards. Many of those who lined up were unregistered voters. (Mindanao Examiner)

Police said a 10-year old girl Marsalin Sangkula was wounded in the attack that targeted a school in Maimbung town. Authorities said the attacker fired one round of rifle grenade that exploded near a crowded school room where dozens of people were casting their votes.

“We don’t who was behind this attack, but we have doubled our security to protect the voters from further attacks,” said Inspector Nilo Mata, the town’s chief of police.

But before the day was over fist fights erupted between followers of candidates in the village elections. There were many accusations that incumbent village officials were buying votes or had used people from other villages to vote for them.

One candidate who was challenging the incumbent village chieftain said he caught followers of his political foe allegedly engaged in vote-buying and fraud, an accusation denied by the leader.

Before elections were over, poll officials stopped the voting in midday after more melees broke out between followers of opposing candidates and policemen and soldiers had to be called in to stop the fighting.

Security forces also escorted poll officials to the office of the Commission on Elections in Maimbung to prevent gangs from snatching the ballot boxes. Poll officials said they have to close the voting to prevent further violence between opposing groups.

“It was the decision of the Board of Election Inspectors and we have to respect that decision. There were commotion and fighting among followers of the candidates, but we have secured all the ballots,” said Holma Hassan, of the Commission on Elections.

Elections were generally peaceful in many parts of Sulu, one of five provinces under the Muslim autonomous region. (Mindanao Examiner)
Posted by The Mindanao Examiner Regional Newspaper at 6:01 PM