Zamboanga Says No To Inclusion In Proposed Muslim Homeland In Mindanao

Zamboanga City Mayor Celso Lobregat speaks to a huge crowd during a forum on the peace process Monday 27 March 2006, below, residents listen behind a sign. (Zamboanga Journal) 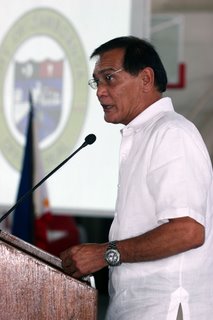 "The government is transparent in the peace talks with the Moro Islamic Liberation Front and there is nothing to hide to the public about the peace process," Dureza said.

Mayor Celso Lobregat led local officials and residents in opposing the inclusion of Zamboanga City to any proposed Bangsamoro homeland or the dismembering of the country.
"We maintain that we don't want any part of this negotiations and all we ask is to leave Zamboanga City alone," said Lobregat.

Even the Catholic Church has opposed the city's inclusion to the Muslim homeland. "The people have spoken and we have shown that we are all united together. Leave us alone in peace," said Msgr. Crisanto dela Cruz.

"I and my family and our neighbors come here to support Mayor Lobregat and besides we do not want to be part of any Muslim state or homeland."
"We are free here in Zamboanga and we don't want any part in this peace talks with the rebels, they should leave us alone in peace," said 56-year old Juanito Atilano, a farmer in Vitali village, about 40 km east of here.

Some of those who arrived have placards that read: "Leave us in Peace, go away rebels." One sign reads, "Pls. exclude Zamboanga to be part of MILF-GRP peace agreement." 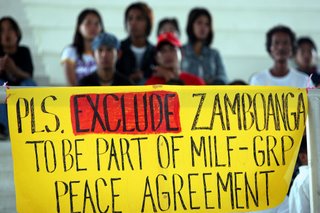 The negotiators hope to finalize an agreement on the proposed homeland for more than 4 million Muslims in the south, which is also home to more than 9 million Christians and indigenous tribes.

Both sides have agreed on several crucial issues, including the coverage of a proposed ancestral domain in the five Muslim autonomous provinces of Basilan, Sulu, Tawi-Tawi, Lanao del Sur and Maguindanao. And other areas in Zamboanga del Norte, Zamboanga del Sur, North Cotabato, Sultan Kudarat and Sarangani provinces, which have large Muslim communities and indigenous tribes.

He said the plebiscite would be supervised either by the United Nations or an international group composed of countries that are supporting the peace talks.

"Everything in the peace agreement will be submitted to the people. There is nothing to hide and just like today, Zamboanga City is host to a forum on the peace process, and we really wanted all these to be transparent," Kabalu said.

"This is a sellout. We won't allow Mindanao to be dismembered, and we must act swiftly before it is too late," Lobregat said.

A new group in Zamboanga City called the Concerned Citizen-Activists for Development (CCA), composed mostly of allies of Lobregat, said it would oppose any move to include the city to the separate homeland for Muslims.

Many Arab countries, including the influential Organization of Islamic Conference, Libya, Saudi Arabia and the United States are strongly supporting the peace talks.

Kabalu said peace negotiators were discussing on how the Muslims will run the proposed new government, but he was quick to say that both sides are seriously studying new formulas based on model countries such as Sudan, Palestine, East Timor, Northern Ireland, and Bougainville.

"Talks are going on about the proposal for a shared government and shared sovereignty between the Bangsamoro people and the Philippine government."

"The results of this proposal will depend entirely on the outcome of the peace negotiations. Once the new Bangsamoro government is finally set up, then the five-province Muslim autonomous region will be dissolved," Kabalu said.

"This is the clamor of the millions of Filipino Muslim not only in Mindanao, but all across the Philippines, to have their own government. The aspiration and determination of the Bangsamoro people is very strong and we are all supporting this proposal to put up a Muslim government in the southern region," he said.
Posted by The Mindanao Examiner Regional Newspaper at 5:19 PM