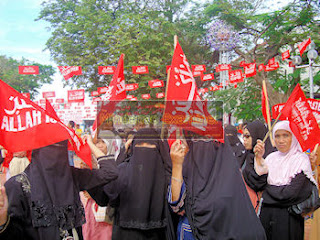 Muslim women protest the presence of US troops in Southern Philippines. (Photos by Consortium Maulana for the Mindanao Examiner)


SULTAN KUDARAT, Philippines (Mindanao Examiner / Jan. 28, 2008) - The Moro Islamic Liberation Front (MILF), which is negotiating peace the Philippine government, urged civil society organizations to be vigilant on the resumption of a joint RP-US military training exercises in Mindanao.
Philippine officials announced the resumption next month of the Balikatan 2008, codename of this year’s military training in Cagayan de Oro City, Lanao del Norte and Lanao del Sur and Sulu provinces despite a series of protests from Muslim villagers and civil groups.
American troops will arrive in Cagayan de Oro City, Lanao del Sur and Lanao del Norte starting February 18 as part of Balikatan, and will be deployed in Sulu, Western and North Eastern Mindanao.
Mohagher Iqbal, chief MILF peace negotiator, said the MILF committee ceasefire has written to the Philippine government about the Balikatan 2008 to get an assurance that the rights of the Muslims and indigenous people would not be violated during the training.
“We are not able to get the response of the GRP as of this time,” Iqbal said “[but] we told our in Lanao to coordinate with NGOs (non-government organizations) and non-partisan groups to do something in response to these exercises, such as human rights violations. NGOs play a vital role in these issues confronting the areas,” he said.
Last month, the US threatened to cancel this year’s Balikatan after a Filipino court denied to return an American Marine Lance Corporal Daniel Smith, who was convicted of raping a Filipina, to American custody. The decision has temporarily caused severe strains in diplomatic relations between the Philippines and the US.
The Arroyo administration, bowing to the pressure caused by the worsening bilateral relations, asserted that Americans have the right of custody over Smith by virtue of 1998 Visiting Forces Agreement (VFA), which governs American soldiers participating in the military exercises.
The US announced resumption of Balikatan after Smith was transferred from Makati City Jail to the US Embassy without a court order.
Smith was found guilty and sentenced to 40 years in jail for raping “Nicole,” as the victim is publicly known, when the US troops conducted war games in Subic in 2005.
A number of groups have attacked the VFA in “giving US authorities legal jurisdiction over American soldiers who commit crimes in the Philippines” and called it a “US strategy in setting up a permanent base in Mindanao.”
Bagong Alyansang Makabayan (BAYAN) has called for a full disclosure of the status of the Mutual Logistics Support Agreement (MLSA) that allows US forces to use Philippine facilities as bases and forward stations.
Renato Reyes Jr., BAYAN secretary general, said they have urged Congress to shed light on how the VFA and the MLSA “actually operate in Mindanao.” Under the VFA, American troops are allowed to stay in the Philippines for an unspecified length of time. They are also allowed to use Philippine facilities for storage of supplies and pre-positioning of equipment under the MLSA, Reyes said.
“We believe that the presence of armed US Special Forces in Mindanao, under whatever guise, poses a threat to local security. We also believe that their continuing engagement in Mindanao undermines national sovereignty,” Reyes added.
Some 10,000 demonstrators in an interfaith peace caravan-rally in Iligan last week assailed the return of the Balikatan as “anti-Mindanawons” and expressed fear that it may “severely add damage to injury” in the talks between the government and the MILF.
“This interfaith peace caravan-rally intends to prevent possible conflict and to show to the parties that the Bangsamoro is in solidarity with the Christians and the Lumads” said Lacs Dalidig of the Islamic Movement for Electoral Reform and Good Governance (IMERGG) and Muslim Multi-sectoral Movement for Peace and Development (MMMPD).
“If this acts are not enough to catch the attention of the government, the interfaith civil society organizations will organize the walk for peace from Marawi City to Malacanang Palace to show to the government that we are indeed very serious in our fervor to attain just and lasting peace in Mindanao,” Dalidig added.
“We are one with the Bangsamoro in the call for lasting peace. After all only those who declared war win; we are all victims,” said Fr. Chito Sugano of the Marawi Catholic church. “The Bangsamoro homeland, our bread and butter are happily utilized as battlegrounds, leaving its inhabitants with dime of hope.”
During the military offensives in Sulu and Basilan last year, fully-armed American soldiers were spotted leading an armed Philippine military convoy. This was seen as a violation of the VFA which does not allow US troops to engage in actual combat in the Philippines, critics said. (Norodin Makalay)
Posted by The Mindanao Examiner Regional Newspaper at 12:01 PM