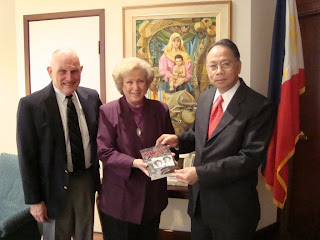 Philippine Ambassador to the United States Willy C. Gaa receives from Virginia Hansen Holmes “Guerilla Daughter,” a book chronicling the experience of the Hansen family in Mindanao during the occupation of the Philippines in World War II.
In her courtesy call on Ambassador Gaa in Washington DC on March 6, Holmes recounted the care, concern and generosity she and her family received from Filipinos during “a most difficult time” for everyone.
Hansen too recalled the bravery and courage of Filipinos in the island’s resistance movement where her father and brother also fought as guerilla soldiers in the Tenth Military District, US Forces in the Philippines under Colonel Wendell Fertig.
Guerilla Daughter, published by the Kent State University Press, uses original documents and papers belonging to Hansen’s father, Charles, and her own “vivid recollections and the reminiscences of her siblings” to present a gripping account of extraordinary survival.
Also in photo is Hansen’s husband Kent, a retired CIA officer and “history buff” who developed timelines and commentaries to complement Hansen’s personal experiences. Hansen donated a copy of the book to the Philippine Embassy.
Link: http://www.philippineembassy-usa.org./PRAuthorPresentsBookOnAmericanFamily
Posted by The Mindanao Examiner Regional Newspaper at 11:14 PM